The King of the Pride 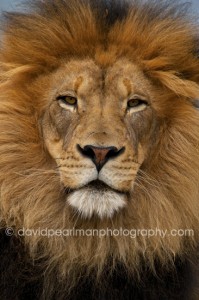 August of 2009 presented me with an opportunity to travel from my home in South Florida to the last major city in Southern California. San Diego had always been a place I wanted to explore but for reasons beyond my understanding, I had yet to visit. What an enchanting area… Balboa Park, Old Town, The Gaslamp Quarter, Coronado, The mountains the ocean, the desert… It’s a wonder it isn’t the most populated city in the USA. When speaking with a friend about my then upcoming trip to San Diego, I learned about their Wild Animal Park. Never being someone who particularly cared for zoos, as seeing animals caged and controlled by man creeps me out to no end, I was told that this Wild Animal Park was different. The vast amount of acreage was developed to resemble the African plains. I also heard that a male lion named “Izu” resided there. A full frame portrait of the magnificent face of the male African Lion was one of those images I had always seen in my head and I desperately wanted to capture and immortalize. For me, it was really important to utilize only the richest and warmest light at just the right time of day to achieve the perfect shot. I knew the expression I wanted was one of a regal nature and not a snarl. I wanted eye contact with my subject and was so lucky to get it. Frankly, these animals sleep the majority of the day away.

As I said, you could stand there looking through the lens of your camera for literally hours before this animal lift’s his head up from a sleep. Then, once he does, what were the chances in his 360 degree world that he would lock eyes with me through the front of my 500mm lens? With luck at my side, the moment occurred in the light I sought out which helped me to get this, one of my all time favorite animal portraits. I do struggle with the fact that I acquired and achieved this image in a place that holds animals captive. But the other side of the coin is that while other lions are shamelessly hunted down by man in several countries in Africa, this particular male and several others like him are being treated somewhat humanely in zoos all over the world and are standing by ready to repopulate a species of animal we would surely miss if left to go endangered or perhaps even extinct.

This entry was posted on Sunday, December 6th, 2009 at 8:20 am and is filed under Photographer's Notebook. You can follow any responses to this entry through the RSS 2.0 feed. You can trackback from your own site.