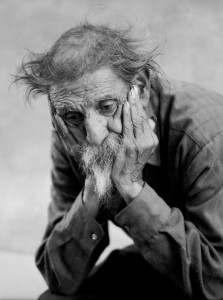 Tony’s face seemed to call out to me as I drove past him on a one way street in Santa Fe, NM. It was one of those pivotal moments in life when all the photography karma in the world seemed to be at my beckon call. The light was perfect, I had the right camera and lens, a few left over rolls of film and a subject who was every photographer’s dream.

Well prior to my moving to Boca Raton, Florida and several years before the digital revolution, I had just finished an assignment photo shoot in Santa Fe when I saw a man, who, for the most part appeared penniless, looking as though he had been through life’s ringer and back. He was sitting on a bench facing the street. I scrambled to find a parking spot, grabbed my camera case and tripod out of my car and walked over to him…

Upon approaching him, his face began to move me more and more. It was as though I could tell the story of his life by reading each and every line on his sun weathered skin. I introduced myself to him and told him I was a photographer and that he had the most interesting face I had ever seen.

I was so intrigued, I offered to pay him to sit for me. He agreed to allow me to take up his time, but to my astonishment, would not accept the money. This did not sit well with me. After all, he was about to give me such a huge part of himself that I, in turn, desperately wanted to thank him.

From there I lead him to an area just around the corner that had a different bench, a non-complicated background and, of course, the most amazing light of the day. I began loading the medium format film into my Bronica and turned to look at this man once again. He was sitting exactly as you see him here in the photograph. I quickly put the camera on the tripod and began shooting. First a few different exposures, then a few different angles and poses. I thanked him very much and we shook hands again. He told me his name was Tony. I asked him if he had an address I could send a copy of his image to and he simply said, “This is my address… Santa Fe, New Mexico.”

Upon returning to my then Chicago studio, I sent the film off to the lab to be processed and proofed. When it was delivered, I eagerly went to the light table and looked at the images. Just as I suspected, I could have taken the first photo and been done with the shoot. #1 on the roll was Tony waiting patiently for me to finish my setup. I neither told him how to sit nor showed him what to do with his hands. At that exact moment, it occurred to me that this man had given me a gift. Not only had he shared with me his image to become part of my work, he taught me a lesson; in today’s fast paced world where we are hustling and bustling to get from one place to another, never allowing ourselves enough time to be in the moment, here was Tony… A man obviously close to the end of his life with patience as though he had an eternity to live. Thank you Tony.

This entry was posted on Sunday, December 6th, 2009 at 12:02 pm and is filed under Photographer's Notebook. You can follow any responses to this entry through the RSS 2.0 feed. You can trackback from your own site.