A Surprise Shower In The Dry Season 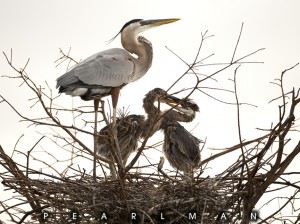 No sooner did I arrive at my favorite spot at Wakodahatchee Wetland Wildlife Park in Delray Beach, Florida when the cool morning air smacked me right in the nostrils with the pungent and unmistakable scent of bird urine.  Unpleasant as that was, it was nothing compared to what I was about to encounter.  As I set up my camera and 500mm lens on a tripod, I noticed that the sun was coming up rather differently than it had done nearly every day in the past two months.

The wetlands were dangerously close to becoming drylands.   In fact, the wetland basin was little more than mud – and some of the mud was dry with cracks only the lack of moisture from the most lengthy droughts can produce.  But the biggest alligator in the area was still around.  I could hear him growling that very primitive rumble in the near distance.

Sunlight was struggling to find its way to Earth, and warm the beautiful scenery that was beginning to include some bruised and sullen rain clouds looming ominously to the east.  No worries, I thought…  It can’t rain.  Mother Nature would never be so cruel as to send rain on the first day that I decided to take my equipment out for a morning photo safari in months, or would she? 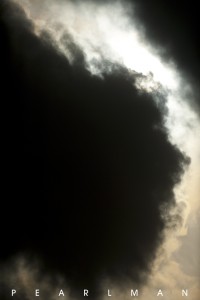 She’s far too kind and compassionate to want me to be caught a quarter mile away from any structure capable of sheltering me and my equipment.  Turned out, Mother Nature was more determined to take pity on the wetland creatures than she was concerned about my stuff.  And rain it did.  It fell from the sky in buckets – but thankfully only for about ten minutes. Once the rain stopped, I stood for a moment dripping wet.  I was dumbfounded that, despite 25 years experience, I had still allowed myself to be as unprepared as I was.  No umbrella, waterproof poncho or plastic bags to fit over my camera cases.  The chill of the rain-soaked air permeated my clothing.  Cold and wet, but determined to view and process the damage quickly, I unzipped the rather large and heavy camera bags that served as my gear’s sole protection from the elements.  I expected to see what would amount to 50 or 60 grand in damage to my equipment, and I started to think about how my insurance company was going to bone me.  I could already hear the despicable arguments of the claims adjuster, “Mr. Pearlman, it says right here on your insurance policy that we do not cover any water damage sustained to your cameras on Saturday mornings during the dry season.” 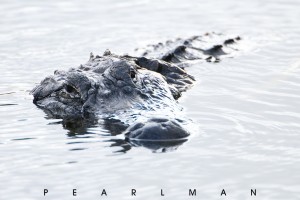 Imagine my delight and surprise when I opened the bags to find everything bone dry.  Bravo Think Tank and Tamrac Bags!  You did exactly what you claimed to do and I won’t have to deal with the only people on the planet more loathsome and dishonorable than lawyers – insurance agents. Now sunshine was beginning to stream down between the breaking cloud formations.  Suddenly, the wildlife park came alive, soaring with activity.  The bull alligator appeared thrilled with the short attempt  to end the dry season early and began flipping around in circles under his fresh new coat of H2O.  I had to take the cameras out in a hurry if I was going to catch any of that action. 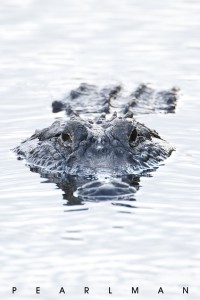 I’m not sure how, or why, but animals seem to know precisely when you’re ill-prepared to photograph them and choose those times to do the most unusual and outrageous things.  What this reptile didn’t know was that I am the quickest draw in these here parts and can build a camera system and catch the end of his show before he could spell death roll – if indeed alligators could spell. A female great blue heron began shaking the rain off her feathers and flew to distant trees to collect twigs to continue building her nest, where her partner protected their baby chicks.  One female anhinga who I named “Linda” for obvious reasons, fed her chicks straight out of her throat.  At times it looked as if her chicks’ heads were so deep in her throat that they appeared to be pulling food directly from her stomach! Of the two plus hours I spent in the quiet sweet light taking pictures of these amazing critters, it never occurred to me to check my iphone, so cleverly tucked away in my photo vest pocket.  At the end of the shoot, I pulled it out to see if anyone had tried to contact me.  That was when I noticed the disturbing sight of moisture under the now-dim screen of my little, and mind you expensive phone / calendar / address book / keeper of every important piece of information I have.  Perhaps I should have invested in a bag for my iphone as well! 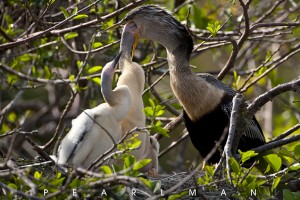 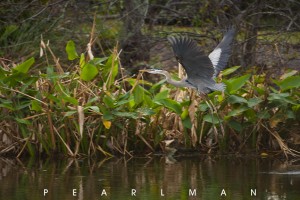 This entry was posted on Sunday, March 6th, 2011 at 12:54 pm and is filed under Recent News. You can follow any responses to this entry through the RSS 2.0 feed. You can trackback from your own site.